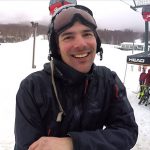 Kris is a super aggressive skier. He’s also a pretty big and powerful guy, so can really drive a ski. While he’s only been skiing for 12 years, you likely wouldn’t guess that if you followed him for a run as his ability and technique have progressed to an advanced level. He currently works as a ski boot fitter at Inner Bootworks here in Stowe and also works as a ski instructor for Stowe Mountain Resort. His focus on technique is important for both his jobs and shines through in his skiing as well. His current ski of choice is the Nordica Enforcer 100, which seems to be a favorite among some of our bigger testers. He loves to ski steep terrain and also has a Blizzard Gunsmoke in his quiver for those deeper pow days.