The Ripstick 86 is a brand new ski for Elan going into 2018 and is the narrowest in their new Freeride collection. It is built using their new TNT technology that uses a wood core with vapor tip inserts to reduce weight. It also uses Tubelite technology, which is essentially strips of three dimensional carbon fiber running along the edges of the ski. This increases responsiveness and stability without the extra weight of a metal laminate. They have Elan’s Mountain Rocker profile which smooths out turn initiation, while also giving them more maneuverability in variable snow and the 86 mm waist width is suitable for a wide range of terrain. What did our testers think of a ski that on paper looks to be quite the versatile all mountain ski?

James Stewart seemed impressed by the skis combination of light weight, quickness, and stability, which seems to be a theme among all these new Ripstick models from Elan. James tested the 184 cm length and he commented that it felt “super quick and light, but really stable when you get it on edge and out from under you.” He admitted that it “surprised me with its carving chops,” and we totally understand where he’s coming from. I don’t think any of us expected these skis to be such good carvers considering they are built with a focus on being light and don’t use any metal, but Elan has certainly done a commendable job retaining torsional stiffness and stability. James thinks it has a lot to do with the ski’s carbon tube stringers, simply stating that they are “rad.”

Jamie Bisbee was another tester who found the Ripstick 86 held up to just about whatever level of aggressiveness and power he put into them, “the harder you push on it the more you get out of it.” Jamie was skiing the 176 cm length and also found them to make a wide range of turn shapes really easily, “short, medium, long radius turns through anything! Hard snow? No problem.” Elan, what did you put in this ski?! Unicorn magic?

David Wolfgang continued the trend of somewhat surprised testers, commenting that he found it to be “extremely quick, but unbelievably stable.” We think this is a key word for describing the Ripstick 86: unbelievable. Pick one up and you’ll notice how light they are. Have a pair on your feet and you’ll wonder if maybe someone swapped skis without you noticing as their stability and power seem to far outperform the skis weight. David skied the 184 cm and ended up calling it a “real winner; a do everything carver.”

Dave Marryat thought it would make a “great one ski east coast quiver.” While we certainly don’t disagree with Dave, it could be a great one ski quiver for an eastern skier, it could also act as more of a dedicated on trail or carving specific ski for a western skier that already has wider, more rockered skis due to its excellent performance in soft snow. As Dave describes, they are “stable in soft corduroy and hard pack. Wide enough to smooth out crud, narrow enough to get on edge.” Dave skied the 176 cm ski.

The all mountain category has a brand new ski that’s going to turn some heads in 2018: the Elan Ripstick 86. It offers such an impressive blend of being lightweight, stable, and energetic that it almost seems to good to be true. We’d compare it to the new Blizzard Brahma CA and put it in a category of skis that seems to be becoming more common: lightweight all mountain skis that can still absolutely rip. Oh wait, maybe that’s why they called them Ripsticks? 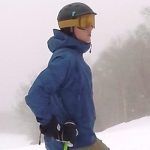 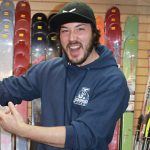