K2’s Konic series of skis are designed to be versatile all mountain carving skis. The iKonic 80 Ti is one of two skis at the top of the line that uses metal laminates in its construction. K2’s Konic construction uses lighter weight materials at the center of the ski with denser, stiffer wood at the edges along with metal laminates. This reduces the overall weight of the ski with the denser wood and metal laminates providing the stiffness, dampening properties, and power that we look for out of skis that use metal. Because they are not as heavy as they would be if they used full sheets of metal and have an 80 mm waist width the iKonic 80 Ti should be relatively versatile in terms of achieving performance outside of carving on firm snow. Do they? And what about carving performance? Let’s find out.

Mike Aidala tested the 170 cm length and called the iKonic 80 Ti a “great on-trail carving ski with versatility and solid playfulness for its 80 mm width.” Mike found them to have “surprisingly playful performance for an on-piste ski with metal.” He found that he could ski more variable snow conditions than just firm groomers without the ski getting too bogged down or feeling overwhelming. Mike also thought they had great stability for high speed skiing over choppy snow conditions. While he was impressed by their performance off perfect groomed slopes, he did end his test form by saying it would be a “great option for advanced to expert skiers who spend the majority of their time on trail.”

Benny Wax had a similar reaction to Mike. He also tested the 170 cm ski and was impressed by how playful the iKonic 80 Ti is given its strong carving performance. He even went as far as giving them 5 out of 5 for playfulness, something that we didn’t see very often when referring to more carving-oriented skis. Benny thought it was a “fun all around frontside ski.” He didn’t think they were too focused on carving performance, rather had a nice mix of performance characteristics for general “frontside” skiing. Obviously this usually means groomers, but they handle moguls, some light tree skiing, and other moderate off-piste terrain without much complaint.

Steve Brown thought it would make a “great east coast carving ski for the advanced skier,” although he did mention that he thought intermediates could handle it as well. Steve tested the 177 cm and gave the ski 5 out of 5 for stability, quickness, playfulness, and forgiveness. Those are four awesome attributes for a single ski to have. Being both playful and stable is a challenging accomplishment for ski manufacturers and it would seem K2 did an admirable job with the iKonic 80 Ti. Steve described the ski in more detail, “the tip shape allows for easy turn initiation, while the sidecut allows for an array of different radius carves. It had great stability at high speeds and arced beautiful turns on groomers.”

We think K2 has done a commendable job with the new iKonic 80 Ti, in addition to the entire line of skis. They have the power and energy we want out of a carving ski, but retain solid versatility and are impressively playful for a ski of this width with metal laminates. If you like carving turns on groomers, but don’t want to feel like you’re stuck there, this could be a fantastic ski choice! 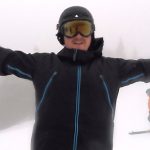 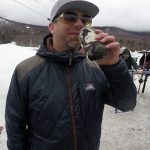