The Kastle FX 85 HP is a high performance all mountain ski that’s designed to offer excellent versatility for use in a variety of terrain. Kastle’s FX series are available as either “HP” versions, and non-HP. When you see HP in the title it signifies the ski having two sheets of titanal metal laminates. While metal makes a ski heavier, it also gives it greater stability, torsional stiffness, and vibration dampening. It’s relatively easy to think of the HP versions as more aggressive and more appropriate for advanced and expert skiers. The FX 85 HP also uses a hook free, early tapered tip and tail along with dual rise rocker, making it much more user-friendly in soft and variable snow conditions when compared to their more groomer-oriented shapes like the MX and LX line. Our three testers on the FX 85 HP all tested the 181 cm length.

Jake Inger thought the FX 85 HP was a “GREAT ski!” He found that it “carved well in both tight and long turns,” and “the ski handled well on everything presented.” While 85 mm might not be quite wide enough to warrant using this ski as your powder ski, just about any other snow condition feels right at home for the FX 85 HP. Jake thinks it would be a great ski for “ripping groomers on the trees,” and we think that’s a great way to describe the ski. They’re not ultra-quick thanks to the extra weight of the metal laminates, but their maneuverable shape allows you to venture off the groomers without feeling overwhelmed.

After a few runs testing the FX 85 HP, Justin Perry thought “HP = High Performance for sure.” Justin found it to have both excellent maneuverability and excellent edge grip, two attributes that somewhat contradict each other. The shape of the ski provides the maneuverability, however, while the metal laminates give it great stability and edge grip. Justin found it “carves through anything including the icy/firm stuff.” In fact, Justin didn’t feel any lack of powder at all, commenting that the construction combined with the “full sidewall lets you lay these over at extremely high speeds.”

Matt McGinnis admitted he was somewhat surprised by the performance of the FX 85 HP. “My first thought upon picking these skis up was ‘wow these are pretty heavy.’ Then I skied them and they were amazing.” When they’re in your hand they are relatively heavy, although not more-so than any other ski that uses two sheets of metal (we can think of a lot). On your feet, however, they don’t feel nearly as heavy. “The two layers of metal combined with slight tip rocker made for a stiff, stable, yet maneuverable ski,” and “in terms of edge hold these were as trustworthy as they come. Once you’re on edge the ski held their turn until you want to release it.” Matt really was impressed by the versatility of the ski, commenting that “they can make quick edge to edge turns as well as long, wide carves, enabling the rider to choose their own variety-filled line down the mountain.”

If you’re looking for a ski with versatility and power, the FX HP skis from Kastle are a fantastic option. Kastle offers these skis in both the 85 mm and a 95 mm waist width, so you’re able to pick the size that works best for where you ski and your personal terrain choices. The FX 85 HP definitely has the edge between the two in terms of quickness on groomers and is a fantastic mogul and tree ski, although if you find yourself in deep powder often you could justify going up in width to the 95. 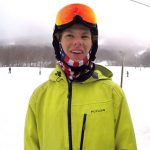