The Volkl Kendo is one of those skis that you see a lot and hear a lot about. It’s been on the market for years and years, although has undergone some changes over that time. The idea behind the Kendo is that it’s a burly and versatile all mountain ski. It uses race-like construction: two sheets of titanal metal sandwiched around a wood core with vertical sidewalls. The current version of the Kendo has tip and tail rocker with camber under foot and a 90 mm waist width. There are a lot of skis out there that fall into this “do-everything” category for all mountain skis, and even a fair amount with two sheets of metal, but the Kendo was certainly one of the earliest to make waves in the ~90 mm all mountain ski world.

Jeff Neagle skied the 177 cm length and described the Kendo as being “exceptionally stable,” but admitted that due to the two sheets of metal and the ski’s weight and stiffness, “it requires some skier input and a certain amount of aggressiveness to get the most out of the ski.” While the addition of tail rocker has made the Kendo a little bit more user-friendly and forgiving, it’s still a pretty demanding, burly ski. You can sit back a little bit and just ride the ski, but it really rewards proactive, aggressive skiers. Jeff thought it was “a nice compliment to the new Kanjo. In the Kanjo you get a lot of energy, in the Kendo you get a lot of stability and smooth performance.” It’s relatively important to note here that the Kanjo uses significantly less metal, so it makes sense that it’s not quite as stable.

Bob St Pierre tested the 184 cm Kendo and referred to it as “an extremely solid ski.” Bob found that “you can definitely feel both sheets of metal and the vertical sidewall.” It has really strong torsional stiffness from the vertical sidewalls and metal laminates in addition to its stable, quiet feel. Bob even went as far as saying it was “one of the burliest skis of the test.”

Marcus Shakun called the Kendo a “good all-around utility knife.” Marcus found it to make “medium to long radius turns,” which sounds about right considering Marcus was skiing the 184 cm ski that has a 22.2 m turn radius. Even the shortest Kendo, the 163 cm, has a middle-of-the-road 16.8 m turn radius, so the Kendo isn’t really going to be a quick turner if we’re talking carving turns. Marcus described it as being very stable with great edge hold, “able to set an edge and not worry about if the ski will hold.” “Tip rocker helps roll into every turn and gas pedal your desired quickness.” Marcus recommended the Kendo for advanced to expert skiers that ski a variety of terrain and is looking for a medium to long radius turn with great edge grip.” Marcus was able to put them to the test in some variable conditions and terrain and did comment that they “might be a bit stiff for bumps, but rocker profile allows you to slide your turns when you want to.”

The Kendo really is best suited for relatively aggressive advanced and expert skiers basically just because it uses so much metal in its construction. Metal makes a ski heavier and requires more effort and skier input to manipulate it into different turn shapes. Skiers who like to charge, however, will have no trouble getting the Kendo to respond nicely to changes in terrain and conditions and will really appreciate the incredibly amount of stability the ski provides for high speed skiing. 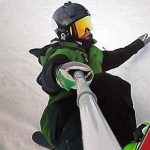 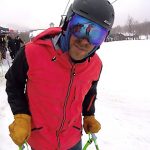