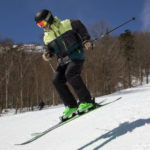 The Black Crows Navis is designed for all-mountain versatility. It uses a 102 mm waist width with a 19 m turn radius in every length. Poplar is used for the wood core, which is a popular material for ski construction due to its stability and lightweight properties. It uses a semi-cap construction and the flex profile is intended to be of medium stiffness. There’s long camber underfoot paired with tip and tail rocker that is more substantial in the tip. Black Crows says it’s quick edge to edge, stable for various terrain and snow conditions, and a friendly, comfortable ski that can still perform at a high level.

Bob St.Pierre thought it was a “great all around ski!” Bob skied the 179.4 cm length and gave it high scores, 4 out of 5, for flotation, quickness/maneuverability, playfulness, and versatility. He did mention that he felt the 179.4 cm length was a little short for him, which likely hurt his stability score, which came in at 3 out of 5. Bob “took it in some gullies and it was great for short turns.” That’s good feedback as the Navis uses less rocker than some of Black Crows’ skis, but Bob didn’t have any trouble maneuvering it in off-piste terrain. Bob mentioned he “would love to try in fresh snow as it’s light, soft, and playful.”

Bob was clearly most impressed by its maneuverability and playful nature, but some of our testers found the Navis to be quite stable. Brad Moskowitz was one of those testers. He’s much smaller than Bob, but also skied the 179.4 cm length. Unlike Bob, Brad scored the Navis 5 out of 5 for both stability and torsional stiffness/edge grip. “A very strong and powerful ski to charge groomers and lay trenches in the steep granular hardpack I found on Hayride.” Brad also tested the Navis Freebird, and noted that it’s “not as quick and nimble as the Navis Freebird, but more confidence-inspiring for high speed charging. Excellent skis!”

Annie MacDonald was also impressed by its stability after testing the 179.4 cm length. Similar scores as Brad, with stability and torsional stiffness/edge grip getting the highest marks. “Ski was very stable, even at the tip. Really wanted to point downhill, instead of coming across the hill. Very stable at speeds, so good for someone who wants to rip. A little stiff to smear, though.” There’s not as much tail rocker in the Navis as some other Black Crows models, and it’s intended to have less tail washout, so that’s not surprising feedback from Annie.

For Evan Caha, it was the “best Black Crows so far!” He too tested the 179.4 cm length and thought it was “fun and poppy” and that he could make “any radius turn.” High scores for stability, quickness/maneuverability, playfulness, and versatility from Evan. “Every Black Crows is different, there’s not one personality of their skis.” That’s a very accurate statement from Evan. Unlike some other brands, Black Crows has a huge variety of shapes and performance levels for different skiers.

If you’re looking for a mid-fat all-mountain/freeride ski, but you prefer more of a traditional profile without a tremendous amount of rocker, you’ll likely love the Navis. As you can see from our testers, different skiers will find slightly different performance in it, which to us means it can satisfy a lot of different skiers and does a good job adapting to different styles. Some skiers will likely want more vibration damping and stability, which would come along with more metal, but the Navis is plenty of ski for most skiers.