The DPS Wailer 100 Alchemist construction is a new ski for 2020 and is designed for the utmost all-mountain versatility. DPS uses their classic RP shaping techniques with the Wailer 100, giving it long, pronounced tip rocker, plenty of early taper, and a relatively short turn radius. This Wailer 100 also uses the DPS Alchemist construction, which according to DPS, is the world’s most advanced ski construction. It utilizes an aspen wood core with pure prepreg carbon fiber laminates with proprietary damping additives. Those damping additives are an important element in the ski’s construction as skis that use carbon fiber are typically not described as damp, but DPS seems to have figured out something special.

Bob St.Pierre thought the Wailer 100 had a “fantastic strength to weight ratio,” which is a great way of describing it. Bob gave the Wailer 100 a lot of high scores, including 5 out of 5 for quickness/maneuverability. The only scores that dropped below 4 out of 5 were for stability and torsional stiffness/edge grip, both receiving 3 out of 5, which doesn’t feel surprising considering Bob is a pretty big guy and was testing the 179 cm length. “Spoony tip and tail gives it a short-turn nature and the stability is great for a ski without metal.” That’s that Alchemist construction coming into play. Despite it being relatively short for Bob, it still had impressive stability considering its weight.

Brad Moskowitz also skied the 179 cm Wailer 100 RP during our test. He was most impressed by its performance in off-piste terrain and softer snow conditions. That’s definitely a goal of the Wailer 100, so we’re glad to get Brad’s feedback on those abilities. “While not the best selection for firm snow conditions, the Wailer is a fun shape and the 100 waist transitions quickly and carves surprisingly well. Fun and easy to ski in the bumps!” 5 out of 5 scores from Brad for quickness/maneuverability, playfulness, and overall impression!

Jeff Neagle, another tester who hopped on that 179 cm length, was also impressed by its maneuverability paired with its somewhat-surprising carving performance. “Good one ski quiver for a lot of skiers. Surprisingly capable on groomers. Responsive out of a turn and holds an edge well for having so much rocker and early taper. It’s also flickable and easy to maneuver in tight terrain. Wide enough for powder days, too.” The Wailer 100 RP isn’t an inexpensive ski, but you’re getting extremely high-level technology in its construction. According to Jeff, it’s “easy to justify the price if you’re using it as a one-ski-quiver.”

David Wolfgang wished for more deeper snow conditions when he got his turn to test the Wailer 100. He also got on the 179 cm length, although we’d venture a guess that testers around David and Bob’s size might prefer going a little longer. “The only thing I found missing when testing this ski today was powder to truly test the dramatic tip rocker. On all other types of terrain and snow conditions, this ski rocked.” We can attest to its performance in deeper snow, having had plenty of opportunities to test that over the past year. It’s valuable to know that David feels it can do everything else, too.

The new Wailer 100 RP is hands-down a versatile ski. It can hold its own on groomers, although its turn radius might be on the small side for skiers looking for raw speed. It’s performance in un-groomed terrain is fantastic, relying mostly on its maneuverability and playful nature. If you love tight terrain like trees, chutes, and other technical skiing, you’ll love the way the Wailer 100 feels. The shorter effective edge doesn’t love tremendously high speeds, but you have to push it pretty darn hard to feel unstable, which we think will satisfy all but the most aggressive skiers. 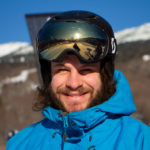