The 2020 Nordica Dobermann Spitfire 80 RB is a strong ski that loves high-speeds and beautiful arced turns. You could call it a recreational race ski and you wouldn’t be wrong. You could also say it’s an all-mountain ski that loves to carve turns on the corduroy. All these things are true. Built like a race ski with a wood core and two sheets of metal, the Dobermann Spitfire 80 also has a carbon race bridge (RB) that really stiffens things up without adding weight. The combination of performance and stability is pretty outstanding, and advanced and expert level skiers will love the precision and edge grip of these awesomely fast sticks. At 174 cm length, the skis have a 16-meter turn radius, so expect to be on edge most of the time. The full camber demands balance and constant attention, so lazy skiers need not apply. Our testers were pretty much over the moon with the stability and torsional stiffness of the 2020 Nordica Dobermann Spitfire 80 RB.

Jeff Neagle skied the 174, and found them to be correct for a carving ski for him. His top scores of 5’s were given for stability, edge hold, and overall impression. Jeff also thought these skis were quite versatile for a carver, and that’s a good sign for a ski that’s 80 mm underfoot. Playfulness and forgiveness received low scores of 3 out of 5, but that’s not really what these skis were designed for. As Jeff says: “I loved skiing these. Similar to the Blizzard Firebird in their overall feel. Precision and power, but a little bit friendlier than some carving skis I’ve been on.” Very important to note, that these skis, although derived from race technology and heritage, are not race-room style skis—they’re definitely in that high-end recreational carver category, but not quite built for the race course.

Also on the 174, James Stewart liked the size, and gave it 4’s out of 5 for torsional stiffness, edge hold, and overall impression. His other scores were all 3’s, showing a well-balanced ski that’s not locked into doing one particular thing. James notes that the Spitfire 80 “really lets the ski flex more evenly along the length of the ski. This makes it a lot more versatile and forgiving.” It’s nice when a carving ski lets you use the whole edge, that’s when you build up some good energy. “Great ski if you want to work on improving those carved turns, but don’t want to commit to an SL weapon.” Slalom skis can be demanding, but really rip turns, and James is insinuating that the RB 80 allows you to carve like that, but are not locked-in like a slalom ski.

Marcus Shakun would have preferred the 180 over his 174 cm test length, but that didn’t stop him from having fun and contributing some valuable information. He scored the skis 5’s out of 5 for stability, torsional stiffness, and edge hold. His overall impression looks like a 4.5, and his low score of 2 out of 5 for flotation is not a surprise given the width. He says the Dobermann Spitfire 80 RB is perfect for an “all-mountain skier that mainly stays on the front side. They love the longer-radius turns. You can snap out medium turns as well.” Due to the shape and build, “you can also take them off-trail because their lively, have lots of energy, and are super-stable underfoot with the wider waist.” Sounds like a pretty well-rounded carving ski for sure.

The 2020 Nordica Dobermann Spitfire 80 RB is best suited for advanced and expert skiers who are looking to blur the line between a front-side carver and an all-mountain ski. While not having the width of some of these more versatile skis, the Spitfire 80 certainly holds its own thanks to the build and overall personality. Skiers will love the precision and power from these awesome all-mountain carvers. 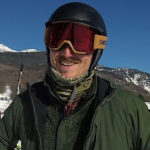