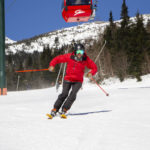 For 2020, Salomon has redesigned the QST 99’s build, but kept the name and general utilitarian nature of the skis. That’s a good thing, as the previous design is still super-popular, and any improvement on that will certainly benefit the ski population as a whole. With a slightly more tapered shape, the skis want to turn a bit more than the previous version, and in softer snow and at slower speeds, that is a huge benefit. They’re lighter as well, and the cork in the tips and tails certainly has something to do with that. Underfoot is where you find the precision in these skis, though, and our testers certainly picked up on that fact.

Brad Schauerman skied the appropriately sized 181 and loved the flotation and stability of the QST 99. His lowest scores were 3’s out of 5 and those were for quickness and playfulness. “This is a great go-anywhere, do-anything ski. It holds a good edge on the groomers and has a light swing weight for skiing trees. A very fun ski for pretty much all conditions. Very versatile.” Brad also points to the natural and instinctive nature of the ski by stating that it “goes right where you tell it to.” We’ve been touting this quality of Salomon skis for years now, that they are very intuitive and natural feeling on your feet, and this 2020 QST 99 seems to be no different.

Bob St.Pierre found the 181 to be short, but still had a great time on it. His top scores of 5 out of 5 for quickness and maneuverability are not surprising, given the shorter test length. Bob’s low score of 3 for torsional stiffness is also not shocking, as this is not a super-stiff ski. He calls the 99 “super-smooth, surfy and fun. I loved making shorter swing turns, but the skis could be persuaded to open it up if needed.” Bob goes on to commend Salomon for changing up the shape for the better: “The wider shovel floats great and the ski is more stout than expected. It easily and quietly sliced through the early-morning groomers.” Sounds like Bob is a fan of the new build!

Evan Caha got a chance to ski both the 181 and the 188 and ended up preferring the longer size. He liked the longer length because of the lighter tips and tails as well as the long and lower tip taper. He remarks that the “camber is farther back and the longer length is better for me. It likes to turn and keep on edge. Hard-charging skiers will plow through crust and crud on these skis. They have a good “do everything” design.” So it sounds like Evan likes the stability and versatility, but is not a fan of the new tip shape and size, and that’s a fair criticism!

Kagen Dewey skied the 181 and liked the sizing. He has some great analysis of the ski. “The new QST 99 fills a similar role as the one from years past, but behaves a bit different. The heavier, stiffer underfoot area makes the ski feel a little more frontsided. The tip profile is slightly less hooky than in years past, but offers more stability. A bit less torsionally stiff than others in its class, but more playful and forgiving as a fair trade.” That’s great info from Kagen, and good realization that everything is a compromise, and it’s nearly impossible to gain traction in one area without losing it in another.

This new QST 99 is poised to take the ski’s already pristine reputation and bump it up a notch or two. It’s great to see a company making little tweaks on an old favorite in order to get a boost in attention, and Salomon has done so cleanly and efficiently with the 2020 QST 99.