The popular XDR 88 Ti returns unchanged except for graphics for 2020. Featuring Salomon’s amazing engineering and design, these skis aren’t built to compete with the Brahmas and Kendos of the world, but rather provide an easier and more fun version of those big stiff skis that a wider audience will enjoy. Make no mistake, they’re still high-quality boards with high-performance ceilings. They simply do not have to be driven as hard or fast in order to generate a decent amount of power and pop. With a poplar wood core and a Ti power plate, the skis are stiff and stable underfoot, and more playful and forgiving in the tips and tails. Add that personality to the 88 mm waist width and you’ve got a winning combination. As usual, our testers were caught off-guard by the poise and power of the 2020 Salomon XDR 88 Ti.

Parker Herlihy is one of those skiers who can command a Kendo or Brahma appropriately, so it’s nice to hear what he has to say about the XDR 88. He skied the 179 which was too short for him, but still had an overall favorable impression. He scored the ski a 5 out of 5 for torsional stiffness and edge hold, and a 4 out of 5 for overall impression. He calls it “a solid Salomon ski that prefers to remain glued to the snow.” At the 179 length, Parker did find it to be “chattery at speed” but continued on to state that the ski is best for “hard-charging on hard pack.”

Dave Marryat had a different reaction in terms of sizing, finding the 179 he skied to be too long. As such, his top marks for stability is not a shock. He also scored the skis 5’s out of 5 for torsional stiffness, edge hold, and versatility. His overall impression score of 4 out of 5 leads us to believe that he might not have found it to be tooooo long. “The XDR 88 Ti tracked really well over both hardpack and slough. Excellent stability without excessive weight. For me the next size down would have come around in the turn a bit quicker.” Great stuff from David, who makes a strong point about the ski being so stable for how light it is.

Rick Randall found the 179 to be appropriate for his size and had some consistently high scores for all categories. A ski like this should score consistently, as that’s what it’s designed for, and his overall impression was 4 out of 5. “Easy to ski and not overly demanding. Good edge hold and turn shape. More energy out of the ski when it hooks up in softer snow. I found the rockered tip to be a bit busy on groomers and at speed. I would like that to be quieter and not as much vertical movement.” Good criticism from Rick, here, noting the difference between the full-metal skis and the partial-metal XDR 88. You will lose some of that vibration damping without full metal.

Michael Rooney liked the 179 cm length and his high scores were for stability, quickness, and edge hold. “The Salomon XDR 88 Ti likes flat groomers rather than a lot of bumpy stuff. It will be great for typical intermediate terrain for all intermediate skiers.” Michael makes a good point here that the skis will be strong performers in a good amount of terrain.

The 2020 Salomon XDR 88 Ti has a whole lot going for it as far as an all-mountain ski is concerned. The shape and build make this a total blast both on and off-trail, and skiers from a variety of backgrounds and abilities will love the stability, edge grip, and versatility of this all-mountain tool. 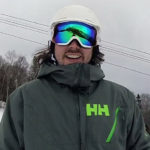