The 2020 Stockli Laser AX is an awesome choice for skiers who spend the majority of their time on the front side of the mountain. The 78 mm waist width will hold a pretty firm edge on some hard snow. While not a floater for sure, the Laser AX is an awesome choice for all-mountain and front side skis. Tip rocker makes the ski easy to turn and does help with some soft snow, the light core makes it quick and the turtle shell comfort design keeps all the material involved and the sandwich sidewall technology make some serious layers and create a ton of snap and pop out of this area. Our testers were pretty stoked on the Laser AX, and even at under 80mm wide, skiers thought it was a versatile carver that shouldn’t be locked just into the groomers.

Ryan Daniel is just the type of skier that Stockli envisions on their skis—fast, fluid, and dynamic. Ryan skied the 174 and thought it was the proper length. He gave top marks for quickness, maneuverability, torsional stiffness, and overall impression. Ryan scored the ski no less than 4 for any category, so it’s safe to say he was pretty impressed. “It liked short-radius turns and had great edge hold. Great ski shape, the tip initiation was great and the rest of the ski tracked right along with it.” Sounds simple enough—just make a ski that starts and finishes really strong and grippy turns! Ryan speaks to the wider audience as well: “A ski that is great for all conditions and turn shapes. It was not difficult to ski, but could also handle a stronger skier.” Sounds pretty nice!

Marcus Shakun found the 182 to be the right length, and gave top marks for stability and torsional stiffness. His 4.5 out of 5 for overall impression is a nice thing to see, and it didn’t take long for Marcus to see why Stockli has such a strong following the carving world. “This ski has the most consistent flex from tip to tail. It holds great on firm snow and digs some trenches in the softer snow.” Marcus echoes Ryan’s sentiments that the AX can be used by a bunch of different skiers. “User friendly ski that you can jump on at any time and have a great run. A skier that knows how to work a ski edge to edge and drive the ski would appreciate the AX.” Again, the AX is not an unapproachable ski, but does have a high-performance ceiling.

Benny Wax drew a smiley face at the end of his review of the 175, scoring it a perfect 5 out of 5 for overall impression. “Great all-mountain ski with solid de-tuned race performance. Transitions were great from short radius to long radius turns. It’s a damp, smooth ride that precisely initiates and completes turns.” Benny concludes his review with a simple message: “Great ride.”

Finding the 182 cm length to be a bit long, Dave Carter still liked the performance and stability of the Stockli Laser AX. He gave top scores of 5’s for stability and torsional stiffness, which with a narrow ski underfoot, is not that surprising, but still good to hear. “Great ski for high-speed cruising and also maneuvered pretty well in trees and bumps.” Dave echoes his scores by stating that the AX has “great stability and edge hold.” High-speed cruising is one of the best things about skiing!

Skiers looking to hit those high speeds will love the stability of the Stockli Laser AX. Our testers spoke highly of the versatility as far as a front side ski goes, with many of them stating that they were pretty fun in the bumps and trees. 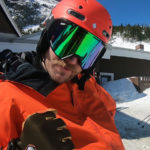