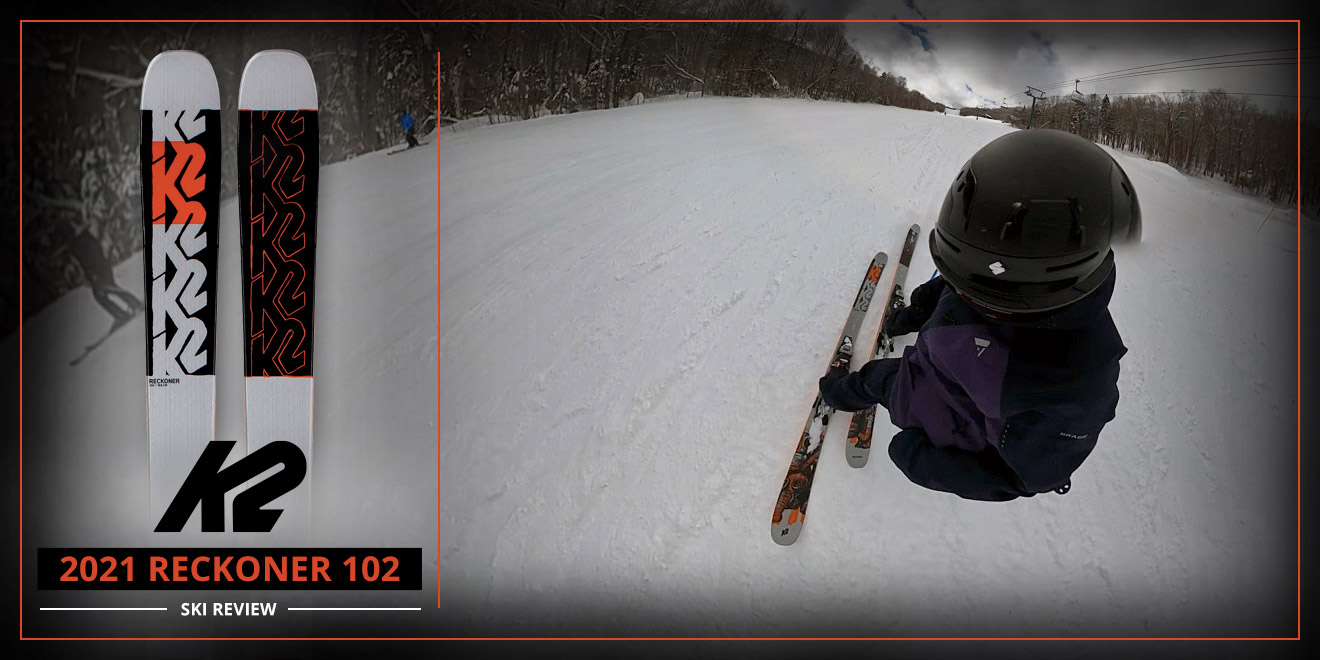 Almost a year ago, I had the opportunity to visit the Seattle-based K2 headquarters to take a first-hand look at their operation and specifically the development of two new collections of skis. During the same trip, we traveled to Mount Hood and participated in the final prototype testing for both of those collections. Needless to say, it was a tremendous opportunity to see how K2 develops skis, talk directly with their engineers and product managers, and of course, test those same skis. One of those collections we’ve already talked about at length, the Disruption frontside carving skis. Today, we’re focusing on the other collection, and specifically one ski out of it, the Reckoner 102.

If the Disruptions fall on one end of the ski performance spectrum, the Reckoners fall almost squarely on the opposite end. The entire collection is split into three widths, Reckoners 102, 112, and 122. They are all twin tips and the range is replacing the Marksman and Catamaran models that have been in the line for quite a few years now. Those two skis used asymmetrical sidecut, something that we talked about a lot over the past few years. The new Reckoners go back to a symmetrical sidecut. Overall, however, they are designed for the same application and were developed alongside the same athletes. The Reckoners are designed for what their engineer, Jed Yeiser, refers to as directional freestyle. The idea is that they should perform well as directional skis, or in other words, when you’re going forward. As Jed points out, even skiers like Pep Fujas and Andy Mahre are skiing facing down the hill the majority of the time. The goal was to give them better directional performance, but retain the ability to ski switch, do tricks, etc.

Confident, playful, and lively are the adjectives Jed used to describe the Reckoner 102 before we made our first turns on them, and that’s a pretty spot on description (I guess it would be weird if K2’s engineer couldn’t accurately describe his own ski design…). So, how do they achieve that performance? Let’s start by looking at shape, which truth be told, is fairly straight-forward. If you put these next to a Marksman, you’ll notice a stark difference. Of course, they don’t use that asymmetrical sidecut, but they also have less rocker. Although Jed described them as “directional” freestyle skis, the recommended mount point is pretty close to center. As is often true with K2 skis, we get a “Midsole” mark and a “Team” mark underfoot. The Midsole mark is only a touch more than 4 cm back from true center, which is already quite centered. The Team mark moves up about 2 cm, even closer to center. So, while they were designed for directional performance in addition to twin tip capabilities, it’s pretty important to realize that they’re still MUCH more center mounted than most other “directional” skis. Fairly high camber height underfoot, which definitely adds to performance, which we’ll get to in a little bit.

First, let’s look at construction, because that’s really important to this ski’s performance. K2 is all about fine-tuning the amount of torsional stiffness in different areas of their skis. We’re seeing it in the Mindbender skis with both Titanal Y-Beam and Spectral Braid. We also see it in the Disruption collection with the use of I-Beam. The Reckoners use a similar Spectral Braid, but its application is different. In the Mindbenders that use Spectral Braid, the tightest weave is in the forebody of the ski. Those skis are more directional, meaning they’re designed to initiate turns in the forebody of the ski and are intended to be skied with more of a forward, powerful stance. That angle then opens up throughout the rest of the ski, allowing the tail of the ski to have less torsional rigidity to release a turn. The Reckoner 102, and the rest of the Reckoners, utilize the tightest weave of Spectral Braiding right underfoot. It lengthens as you reach both the tips and tails. So, that means you get the most torsional stiffness underfoot, and less in the tips and tails. K2 also uses their Carbon Boost, which is similar to what’s used in skis like the Poacher or Sight. Hard to make a ski without a wood core, of course (although we’ve seen some companies do it…). The Reckoners use a blend of fir and aspen to achieve their desired feel. And how do they feel, you might ask? Fun. Playful, easy, fun, super-fun? I think the first thing we should start with is they’re not stiff skis. If you line it up against the Mindbender 99Ti, it’s a much different feel. The tips and tails are particularly soft flexing. That soft flex combined with the rocker profile makes it incredibly easy to release the tail edge and get the ski to slash, pivot, and cut turns. It also makes ollies, butters, presses, and other “newschool” freeride maneuvers incredibly easy. In fact, to be 100% honest, I can’t recall being on a ski that’s easier to butter than these. I personally preferred skiing them on the Team line, the spot just 2 cm back from true center. This allowed me to ski them like a true all-mountain freestyle ski. They absolutely beg for you to jump off stuff, do little 180s, tail butters, nose butters, and wheelies. The Reckoner 102 turns a simple groomer into a pure playground. It’s amazing how easy it is to load up energy in the tips and tails and release it how, when, and where you want to.

I’m sure that sounds great, right? But you’re probably thinking, “if it can do all that, it’s probably not very good at carving or more “traditional” skiing.” That’s where a lot of skiers are going to be pleasantly surprised. The Spectral Braid really does work, and it works wonders for the ski’s performance. The intended soft flex pattern of the tips and tails matches the looser weave and less torsional rigidity. Underfoot, however, they are actually pretty stiff, and remember that they have relatively high camber height too. They also have that tighter weave underfoot too. That means it’s easy to enter a turn, but you can really stand on the ski when you’re in a carve and it doesn’t feel too unstable or too soft. Now, if we go back to the comparison with the Mindbenders and how the Spectral Braid is positioned, the Mindbenders prefer a powerful turn to be initiated out of the forebody of the ski. The Reckoner 102 prefers a more neutral, centered, balanced skiing position and responds better to turns initiated laterally rather than in a fore/aft manner. For someone like myself who spends a lot of time on center mounted twin tips, that came naturally, and for most skiers buying a Reckoner 102, it’ll probably be the same. For some of my fellow testers, however, they had to play around with how they were weighting the ski and their stance before they really found the sweet spot of the Reckoner. So, more traditional skiers will still really enjoy skiing it, it might just take a few more runs to adapt than someone with more of a freestyle/freeride background. So that brings us to application. Who is it best for? I think an easy, obvious recommendation would be the freestyle/terrain park skier who also likes to ski the rest of the mountain. If you’re that type of skier, you’ll absolutely love it, especially if you prefer a more playful platform. As we’ve talked about over the past few weeks and months, this 100-106 mm twin tip category is seeing some pretty exciting new skis, and I would say among that grouping, the Reckoner 102 is one of the softest, one of the most playful, and just all around one of the easiest to ski. It’s not a stiff ski, but the way it flexes into a carving turn at a high edge angle leaves trenches in the snow. So, just because it’s playful, doesn’t mean you can’t lay over some impressive carves. Which brings me to another really good application for this ski. All-mountain skiers who are tired of overly-stiff, ultra-aggressive skis (which there are a lot of). The Reckoner 102, simply put, is a pleasure to ski. A more traditional skier could certainly enjoy it, especially one that’s looking for something with softer flexing tips and tails. It’s hard for me not to think about our trees here at Stowe. They’re tight, they’re technical, and you see a lot of skiers trying to ski them on stiff, heavy skis with lots of metal. You also see a lot of those same skiers struggling on skis like that. Why torture yourself? A ski like the Reckoner 102 is much nimbler and much easier to maneuver through tight terrain, and way more forgiving.

Regardless of whether you’re a terrain park rider, a more traditional all-mountain skier, or somewhere in between, the Reckoner 102 is a whole lot of fun. I personally had a blast skiing it and it felt like a K2 ski should in my opinion: fun, playful, exciting, and different. Lastly, I’d just like to thank K2 for the opportunity to see the design, construction, testing, and production process firsthand. Whatever you’re cooking up next, you could probably convince us to make another trip out west to ski them with you.