#1: World Cup Ski Racers Back on Snow - An Update: Steven Nyman seen celebrating after a race last season. It’s highly likely that he celebrated in much the same way upon returning to on-snow training last week. Image: U.S. Ski and Snowboard Team on Facebook

Wintertime readers of Chairlift Chat know that we typically start Top 5 Fridays off with a World Cup Skiing recap whenever we can. This week, in an effort to return to normalcy as much as possible, we’re kicking things off in a similar fashion as we caught some good news from the world of racing! As you’ve read in previous weeks, one of the many unfortunate consequences of Covid-19 has been limited summertime ski resort operations, as well as restrictions on international travel. This combination of factors has led to an uneven distribution of access to snow for ski racing teams worldwide. This week, Ski Racing Magazine published an article that brings us up to speed in regards to which national teams have been able to get back on snow, when, and where.

Over in Europe, the Norwegian and Swedish teams were the beneficiaries of the terrain within their borders as both national teams have been back on snow since the beginning of May. Slightly behind schedule from their northern neighbors, the French and Austrian teams have also been able to get back on snow, utilizing the glaciers at Courchevel / Val d’Isere and Soelden respectively. For the Italians, citizens of one of the hardest hit nations in the world, Stelvio ski resort began allowing the team private access to the resort on June 1st. Finally, coming in 5th place in the European race to get back on snow, is Switzerland, where their national team was finally able to access the glacier at Zermatt on June 6th. As for the U.S. teams? Thankfully they’re back on snow as well. Starting last week, the Men’s technical team has been training at Mt. Bachelor, while the Women’s technical team (and Men’s Europa Cup team) have been enjoying private access to Copper Mountain. Looking ahead, both the Men’s and Women’s teams plan to work with Mt. Bachelor as well as Timberline Lodge to continue their on snow, offseason training. While it remains anyone’s guess as to how significant of an impact the staggered access to on snow training will have in next year’s races, we’re simply grateful to know that a good number of World Cup athletes are finally able to get back on track. For more on this, check out the article from Ski Racing Magazine. 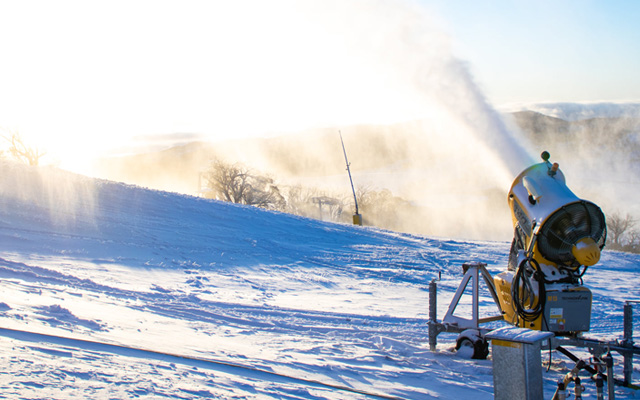 As Vail’s Perisher Resort in Australia blows snow in preparation for the season ahead, questions remain regarding how to best operate a ski area during the social distancing era. For Vail, Perisher’s experiences are expected to inform how the 2020/2021 season will look in North America. Image: Perisher Resort on Facebook

Next up this week is a preview into what you can start to expect the ski resort experience to look like next year. In a phone call with Wall Street analysts, Vail CEO Rob Katz shared plentiful insight into how Vail Resorts is expecting to operate their mountains next winter. A lot gets covered in the relatively short article shared by Summit Daily, but one of the most important takeaways is that Vail will be viewing Perisher Resort, a ski area they own in Australia, as a learning tool as they plan their strategy for their North American resorts next winter. There, Vail will be implementing a number of protocols in an effort to wrap their head around how to successfully operate a ski resort during the social distancing era. While a number of familiar rules will be in place, such as a reduction in capacity and managing amenities, Vail will also begin taking a more strategic look at how best to operate the resort. For instance, Katz confidently stated in the call that, “we do open our resorts and we do open our terrain. And we want people who come to get the full experience … and that’s something we are going to do for next year,” In other words, while there may be capacity restrictions at resorts, it sounds like Vail’s plan is to keep all available terrain and lifts open at their resorts, including gondolas. Citing the fact that the more terrain that’s available, the more visitors will be able to spread out across the mountain, Katz says that his real concern isn’t terrain availability, it’s managing the “pinch points,” such as lift lines and lodges, where visitors tend to convene and likely compromise social distancing. This issue in particular is one that he hopes to iron out over the course of the summer in Perisher. Finally, one last comment made by Katz that demands acknowledgement is that he expects skier traffic to be down next year. While it’s really anyone’s guess as to whether that’ll be reality, or if it’ll simply realign which resorts are busiest (as travel for ski vacations may decrease), Katz’s inclination is that a lower than usual volume of skiers could mitigate the need for capacity restrictions.

Again, there’s quite a bit to unpack here. For us though, there are a few key takeaways. First, if you’re wondering what next season might look like at any Epic or Ikon resort, keep an eye on Perisher this summer. The techniques they use to manage social distancing as well as capacity will likely look familiar come next winter. In particular how, or if, Perisher chooses to use a reservation system will be telling as that’s been the biggest challenge faced by North American resorts that have reopened recently. Secondly, for those of us who were wondering if an inability to operate gondolas would result in limited terrain availability, Katz’s update is encouraging. While we don’t know the details regarding how gondola’s will be routinely kept sanitized, the fact that Katz is committed to opening them when conditions allow is welcome news. Finally, regardless of how you feel about ski resort consolidation, we have to say, in this case it’s quite fortunate that Vail will have a chance to test-drive restricted ski resort operations this summer, giving North American skiers the best chance at a normal winter in the season ahead. For more on this, check out the report from Summit Daily. A map showing the proposed layout of the gondola up Little Cottonwood Canyon. Image via LiftBlog.com

In other news, we have our second update from Utah’s Cottonwood Canyons in as many weeks! This time around, we’re talking transportation. As any of our Salt Lake City based readers know, or really anyone who’s attempted to visit Snowbird or Alta on a powder day can tell you, traffic on the road up Little Cottonwood Canyon can be absolutely brutal, rivaled only by Colorado’s I-70. While it’s far from the first time the topic and potential solutions have been discussed, we caught some news this week that covers a couple of different proposals that aim to alleviate the issue. The first, and most expected, of the two plans would be to increase the volume of public buses traveling up and down the canyon. In that plan, buses could depart as frequently as every 5 minutes, and the canyon road could be widened to include bus only lanes.

The second, and more exciting plan would be the creation of a gondola that runs the length of the canyon. While this idea is certainly the more interesting of the two, it also comes with a longer list of pros and cons. On the pros side of things, the gondola solution would provide the most capacity per hour, shuttling a rate of up to 1,050 people per hour, spread across 30 gondolas capable of carrying 35 people each. In terms of cost, the gondola solution is actually a happy compromise as it would cost more than simply increasing the volume of buses on the canyon road, but less than adding bus lanes. Plus, there’s also the intangible benefit of providing guests with a unique experience full of amazing views. Of course, there are also some cons to this plan, the most significant of which is likely the fact that parking would not be available at the base of the gondola. Instead, those taking the gondola would have to park offsite and be shuttled in, creating an extra step in their trip to and from the resort. Additionally, it’s likely that the development of a gondola would have to pass rigorous environmental challenges, as is always the case when new lifts are established on protected land. Regardless of how the Utah Department of Transportation decides to move forward, the news is likely welcome by anyone who’s sat in traffic, itching to get on snow during a powder day. For an overview of the plans at hand, check out this recap from the Salt Lake Tribune. To learn more details regarding the proposed gondola, LiftBlog.com has an excellent article on the matter. A rendering of what Wintastar Indoor Ski Area could look like upon completion. Image: Wintastar on Facebook

Finally, we’re rounding out the ski news this week with a story that carries a more traditional summertime ski news theme. This week, we received an update from Shanghai, where an indoor ski area that’s being built has its sights set on building the largest indoor ski area in the world. If reading that sentence gave you a bit of deja vu, don’t worry, it’s likely because we’ve reported similar stories multiple times in the past. This time around though, we’re discussing “Wintastar,” a massive 90,000 square meter venue currently being developed in part by Ski Dubai, owners of another indoor ski area in Dubai which comes in at roughly one third the size (offering 22,500 square meters of skiing). As for amenities, you know the drill. The complex will offer a range of attractions, shops, eateries, and lodging accommodations, following a template that’s become common for indoor ski areas. Perhaps most intriguing about this particular ski area though, is its timing. With an opening date scheduled to coincide with the 2022 Beijing Winter Olympics, the development of this ski area fits in perfectly with China’s long term plan of creating a winter sports culture amongst its citizens. That effort will be put to the test upon opening as Wintastar will have the capacity to host 3.2 million visitors a year. For those interested in following the rising trend of indoor ski areas, check out the latest on Wintastar in this article from the Shanghai Rebellion.

A Must Watch if You’re Considering Making the Jump to Backcountry Skiing Next Season:

Finally, Imagine You’re in the Market for a Groomer, and You See This: