#1: Having Obtained the Green Light from Colorado Governor Jared Polis, Arapahoe Basin Reopens for Skiing, Although Without “Keggy Keggers”: For those lucky enough to land a reservation, conditions at Arapahoe Basin have been incredible for their reopening week. Image: Arapahoe Basin on Facebook

At the top of this week’s news is an announcement that Colorado skiers have been eagerly awaiting: Arapahoe Basin has officially reopened for business! Following the expiration of Colorado Governor Jared Polis’s temporary ban on skiing, the green light was given for A-Basin to reopen for the remainder of their planned season. In doing so, the resort joins Oregon’s Timberline Lodge, Washington’s Crystal Mountain (which is set to reopen on 6/1), and Montana’s Beartooth Basin (also set to reopen on 6/1) as the only ski resorts open in North America. Like its counterparts, Arapahoe Basin is implementing strict protocols to limit the spread of Covid-19, including the required use of facial coverings, social distancing on the slopes and in lift lines, and a significantly limited capacity.

One way in which Arapahoe Basin is deferring in its approach however, is in the method that it’s using to grant reservations to the resort. As you know from last week’s Top 5 Friday, resorts have been experiencing technical difficulties with their online reservation systems as a surge of visitors attempt to access the same website at the same exact time as they attempt to secure their spot. That problem played out with Arapahoe Basin’s initial effort as well, resulting in a prompt change in plans. Now, those wishing to ski at Arapahoe Basin must enter their name into a daily drawing, where a set number of names will be provided the opportunity to reserve their spot on the slopes. Unfortunately, this method doesn’t seem to be working out favorably in the eyes of the resort’s customers as a number of Facebook commenters have voiced their displeasure over the system. Additionally, as if the difficulty to secure a reservation wasn’t enough, Governor Polis has also specifically stated that, "If you’re in it for the party and keggy keggers… now is not the time.” So, there’s also that. Regardless, it remains a positive step forward as America attempts to slowly return to normalcy. To learn more about the latest from Arapahoe Basin, check out this article from the Colorado Sun, or visit their Facebook page.

#2: Ski Areas Become Eligible for PPP Loan Forgiveness, But Will it Be Enough? In other “operating a ski resort during the Covid-19 era” news, we’ve learned this week of a subtle, yet important change that’s been made to the federal Paycheck Protection Program (PPP) that could ultimately be a game changer for small and mid size ski resorts. To fully appreciate this story, allow us to provide some background information. When the PPP launched earlier this spring as an economic response to businesses impacted by closures, ski resorts were eligible to apply for loans, and many successfully did. For most businesses, those loans came with an agreement that provided repayment forgiveness for businesses that kept staff on payroll despite being closed. For the ski industry (as well as any winter-focused seasonal business), that put them in a difficult situation as the covid closures occurred more or less at the same time that resorts were beginning their annual downsizing of staff. In other words, ski resorts that typically let seasonal workers go this time of year suddenly found themselves forced into taking on a loan to maintain their businesses while becoming ineligible for repayment forgiveness due to the seasonal nature of their business. Put bluntly, this meant that the very loans that were meant to save businesses could’ve very likely put small to mid size resorts out of business when they found themselves unable to repay them.

Fortunately, due in large part to the leadership of the National Ski Areas Association, additional legislation was approved by the U.S. Treasury Department to allow employment figures at seasonal businesses, particularly ski areas, to be compared to the employment numbers from 12 months prior rather than a period during February and March. For example, if a ski resort that received a PPP loan has 25 employees on staff in May 2020, and had 25 employees on staff in May 2019, they are likely eligible for loan forgiveness. Prior to this slight rule adjustment, resorts were required to compare current totals (25) to employments figures in February and March, which were significantly higher, thus making them ineligible for loan forgiveness. Still, concerns linger as many wonder whether the volume of the loans will be able to sustain small and mid size ski areas through a summer in which many events have been cancelled, and potentially through a winter in which capacity and regulations may significantly decrease the volume of business. While it’s impossible to know what the future holds for this segment of the ski industry, we can at least feel encouraged about this week’s progress for the time being. To learn more on this, check out the report from Summit Daily, or this writeup from the Park Record.

#3: How Covid-19 Might Dramatically Accelerate the Adoption of Alpine Touring: 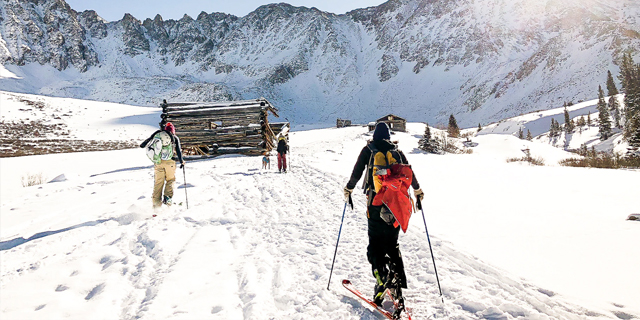 Speaking of uncertainty surrounding next season, we caught an article this week from Powder Magazine that does a great job of exploring an idea that’s been on our minds for a few weeks now, but had yet to be properly discussed. Again, a preface: until a vaccine is in place for Covid-19, there remains a very real chance that ski resort operations will be scaled back in the year ahead, much like they currently are at ski resorts that have reopened. While it’s impossible to say for sure if that will happen, or how resorts may find ways to increase capacity, it’s reasonable to expect that backcountry skiing will, at the very least, see an uptick in participation. In Powder’s article, evidence of this is shared via anecdotal evidence regarding sales of backcountry gear immediately following the closure of ski resorts. At backcountry outfitters in both Colorado and Jackson Hole, Wyoming, shop managers say they sold out of backcountry gear within weeks of resort closures. Unfortunately, many of those purchases didn’t include safety gear, indicating that a number of new backcountry skiers are heading into the mountains, likely without proper safety knowledge and equipment. Sure enough, numerous west coast regions also saw an uptick in human-triggered avalanches after ski resorts closed. This influx of novice backcountry skiers, combined with logistical difficulties of holding avalanche safety courses due to social distancing requirements, could potentially lead to an incredibly problematic season ahead.

That’s the doom and gloom version, and certainly a valid perspective. Here at SkiEssentials however, we always try to look at all angles of a story, and find silver linings wherever possible. While there will almost definitely be some difficulties in the backcountry in the season ahead as the modestly growing segment of alpine touring is likely to explode in popularity, it also provides reason for excitement. In recent years, improved touring technology as well as a focus on creating designated backcountry zones (whether that’s Colorado’s Bluebird Backcountry operation, or local efforts such as Vermont’s RASTA network), have created a foundation for a growing interest in alpine touring. Now, with skiers’ hands potentially being forced in the season ahead, there’s a strong chance that this segment of skiing could explode in popularity. While that means some areas will likely become overcrowded, it also opens the door for potentially new business models that bring ski areas back to a more simplistic time. As a result of Covid-19, it’s entirely possible that the concept of a ski area could be expanded upon, so that the linear trajectory of ski areas becoming vacation destinations could ultimately split, resulting in a second type of ski area that focuses on providing a more natural, human powered experience. While this is merely speculation, it’s hard not to be excited by the idea that backcountry skiing could quickly grow in popularity, ultimately leading to innovative new business models and products. To read what Powder has to say on the subject, give this article a read.

#4: Believe it or Not, Next Year May Be the Best Time to Go Skiing in Japan: Honestly, this isn't even that incredible of a powder skiing image for Japan, but that's exactly why the country's quickly become a skiing mecca. Image: Hakuba Cortina Resort on Facebook

Finally, we’re excited to round out this week with a brief, yet positive story. As you likely know, Japan has been making a name for itself in recent years as a world class destination for powder skiing. Combine images of skiers in neck-deep powder with access to hot springs, sushi, and sake, and the idea of spending a week or two in Japan has become the top line item on countless skiers’ bucket lists. But, there’s also an inherent catch: traveling to Japan to ski is super expensive, and let’s be honest, a solid percentage of skiers looking to visit the country are also likely living the ski bum lifestyle.

This week however, we came across an article that could make the concept of a ski trip to Japan a bit more reasonable, despite the current global pandemic. In an effort to restart tourism, Japan is looking to inject $12.5 Billion into their economy via a tourism stimulus. The way the idea works is that the Japanese Tourism board will provide visitors with daily vouchers worth up to $185/day that can be redeemed at local shops and restaurants. In other words, while you’ll still have to pay your way to Japan, and pay for lodging and lift tickets, there’s a chance that you could dine lavishly for free under this program. There are however, a couple of catches. First of all, the program is set to start at the end of July, so depending on how rapidly vouchers are claimed, it may run out of funding by the time winter comes around. Second, the program is currently only available for domestic tourism, although the possibility of making the vouchers available for international visitors remains an option once travel restrictions are lifted. So, like we said, this upcoming season may be the best time to visit your trip to Japan, although that’s far from certain. To learn more about this, check out the writeup from Mpora.com.

#5: And Now, Your Edits of the Week: Armada Re-shares an All Time Classic, Featuring the Provo Brothers:

Full Disclosure: There Was a Real Lack of New Ski Edits This Week, so Here's a Vintage K2 Demo Team Segment:

More Vintage Ski Footage. If You Know Where to Find This Movie, Please Let Us Know!

Finally, it's Not Skiing, But it is Highly Entertaining: